Healing trauma through imagination - an unlikely story of hope for refugee children.

They fought through incredible perils. They journeyed through desert lands, water mountains, and haunted forests. They have seen incredible beasts lurking in the shadows and dubious men threatening their families. But somehow, they have endured. They have won. Their superpowers helped them survive and save others. They are now safe, everything is going to be fine now…

To have small children imagining this narrative, one needs another kind of superhero – the kind we have found in Serbian NGOs.

Volunteers help the refugees with everything they can. They feed them, they give them clothes or medicines. They shelter them over the day in centers such as Miksaliste. They have even organized a sort of kindergarten for children, to give parents a bit of time to learn English.

Tatjana and others like her work with refugee children to create wonderful maps with superheroes and places – a strategy to help them cope with their tragedies.

Reporter: Tell us about the center.

Tatjana: This is where we welcome children and their families and where we involve them in various activities with the goal of helping them to relax, to feel safe, to feel at home, and to somehow provide the environment where children can be what they really are: children. They did not have much chance to feel like children during this perilous journey.

Tatjana: This is one of the activities that the team in the Child Friendly Space created. It’s called ”Superhero on the way”.

"…they are telling us their stories, about the journey and, most importantly, about the super-powers that they have that helped them along this journey.”

It’s one big map, with many Superheroes, and the children who come to the Child Friendly Space, they all get this small Superhero and then they can paint it and they can actually personalize it. While doing this, they are telling us their stories about the journey and, most importantly, about the super-powers that they have and helped them along this journey.

"The team has created many various maps. This is something that we found to be very useful and very inspiring for children.”

This is how, by telling their story, they are digesting all these difficult experiences that they had and they are also focusing on their strengths, which is very important.

When they finish, they can put their Superhero on the map, together with all the other Superheroes and children really love this activity. This is only one of the activities that we have. The team has created many various maps. This is something that we found to be very useful and very inspiring for children.

Reporter: What about this?

Tatjana: This is the map showing the broad environment of Miksaliste and some different important places for children and their families. So, this is Miksaliste and you can see different symbols describing what’s happening in Miksaliste. There are children, a family in a vehicle - they are telling us that this is actually the first place where they arrived when they came to Belgrade. This is the park in Belgrade and you can see that they draw a fountain there. So, this is where they can find water.

This is the Asylum Centre, which is 30 Km away from Belgrade and where most of the families who arrive to Belgrade spend their time. Actually, they are accommodated there, they are sleeping there, but most of them are coming every day to Miksaliste to spend some time in the Child Friendly Space, to socialize with the team here, with other children and other people who are coming to Miksaliste. You can see that one child drew a family here, and also there are more families. You see, they are drawing houses. So, the whole activity is called "Home on the move”.

This part of the map children drew a couple of months ago, during the summer, because this is where the river Sava is. The families used to go there to spend some time, just sitting on the bank of Sava, and this is where some of the children felt good.

Read Part I Making a stop in Serbia: The killer journey 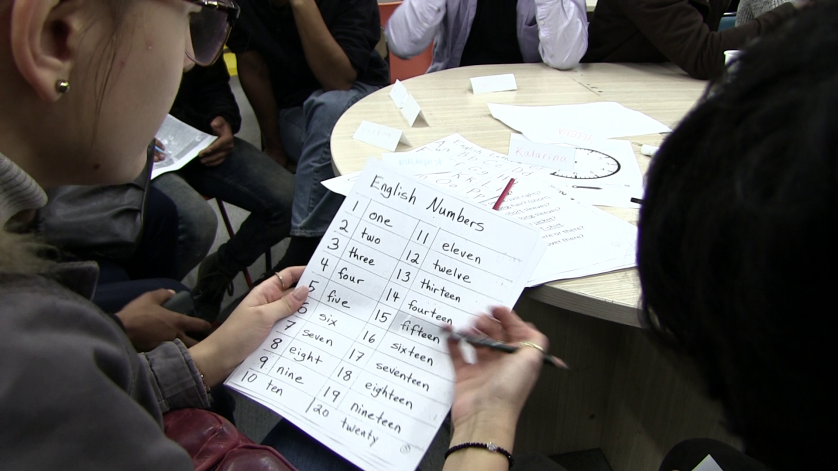 Learning English at the center 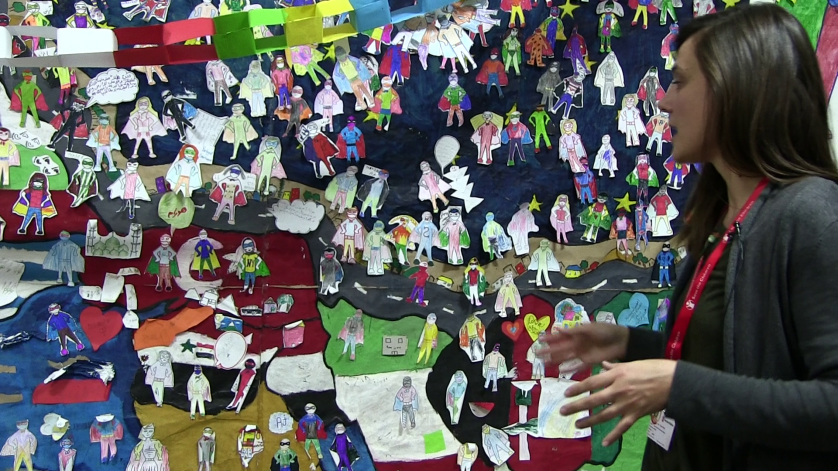 Tatjana, Save the Children, shows us the Superhero Map 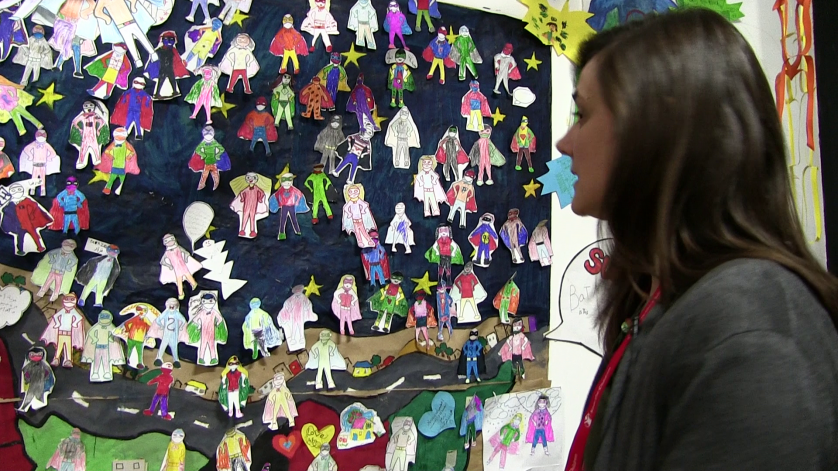 The map is full of drawings 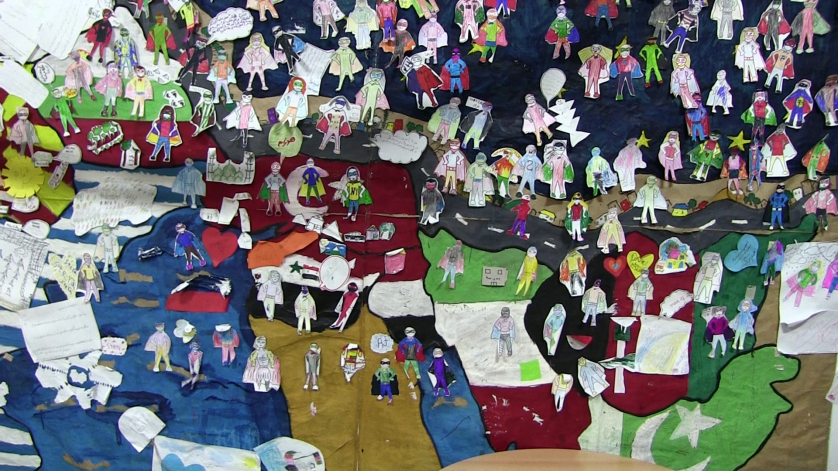 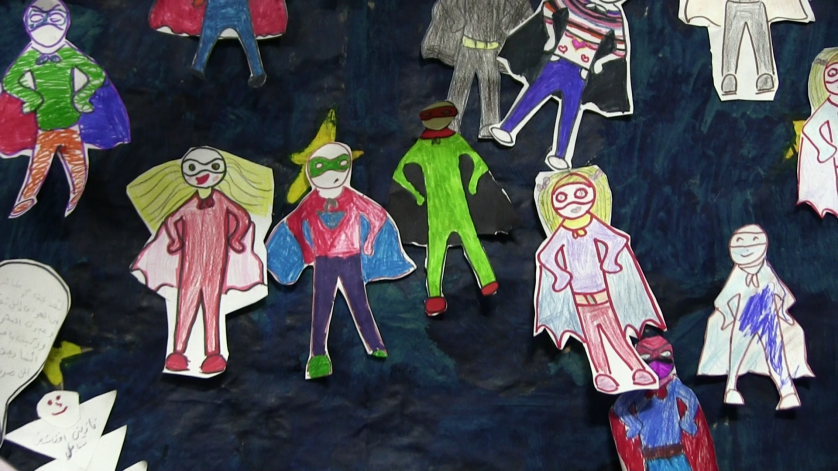 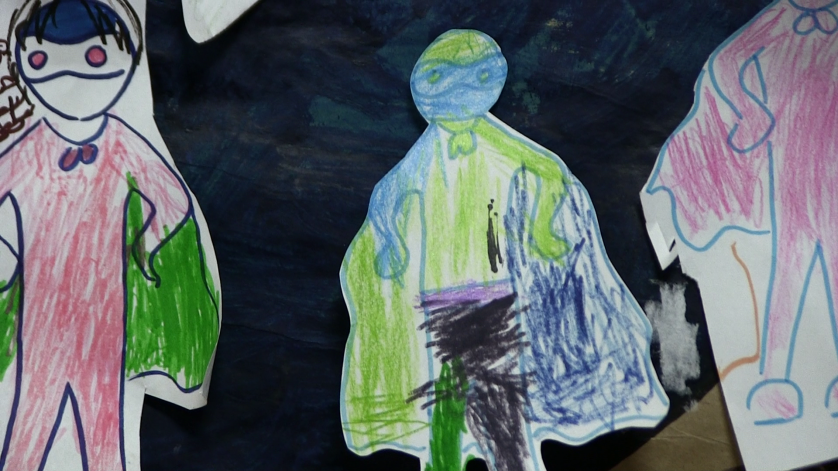 Close-up of a superhero 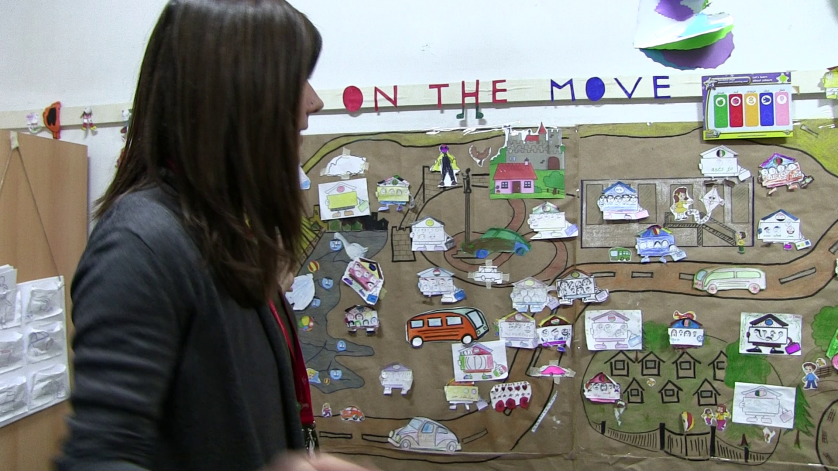 Tatjana, Save the Children, shows us the Home on the move Map 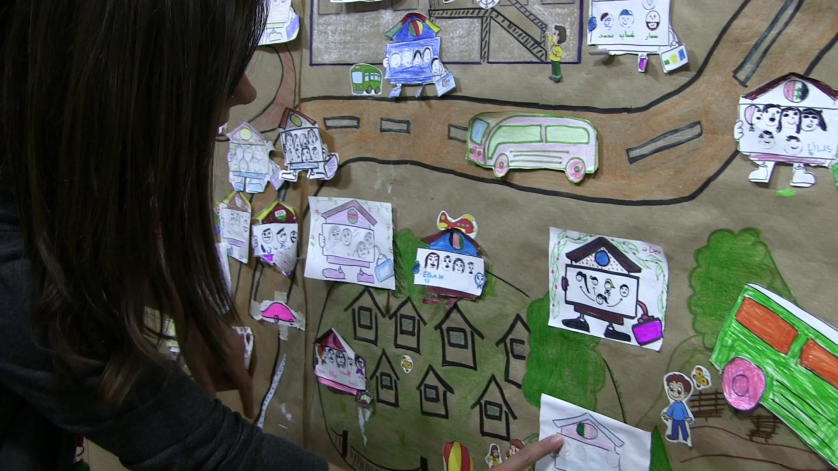 Tatjana, Save the Children, shows us that children feel at home when they are on the road 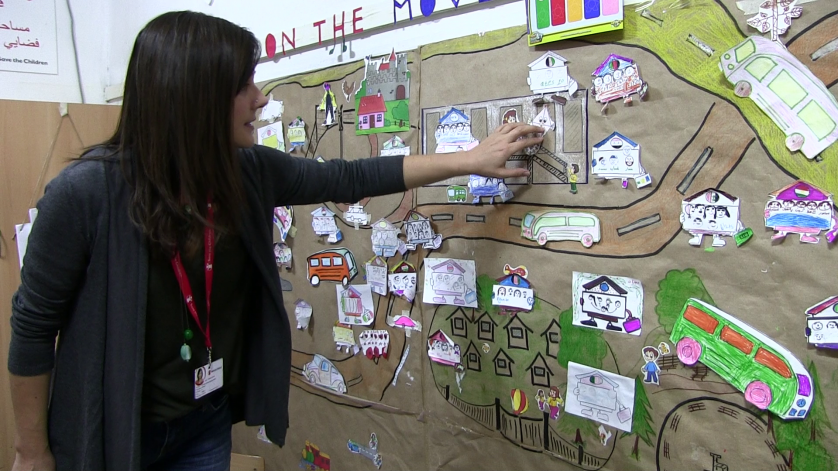 Tatjana, Save the Children, shows us drawings from the map 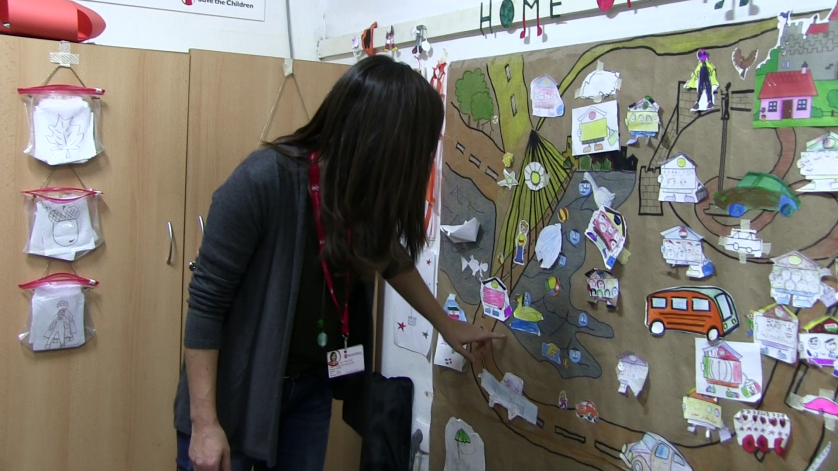 Tatjana, Save the Children, shows us the river Sava on the map, where children have fun 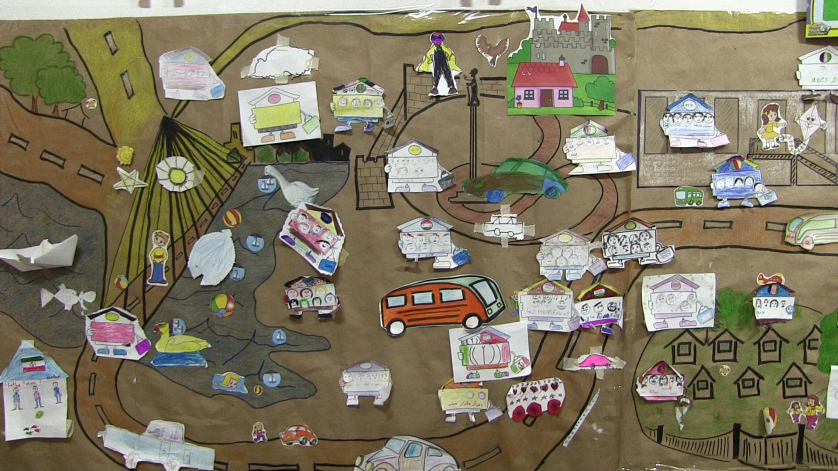 Home on the move Map 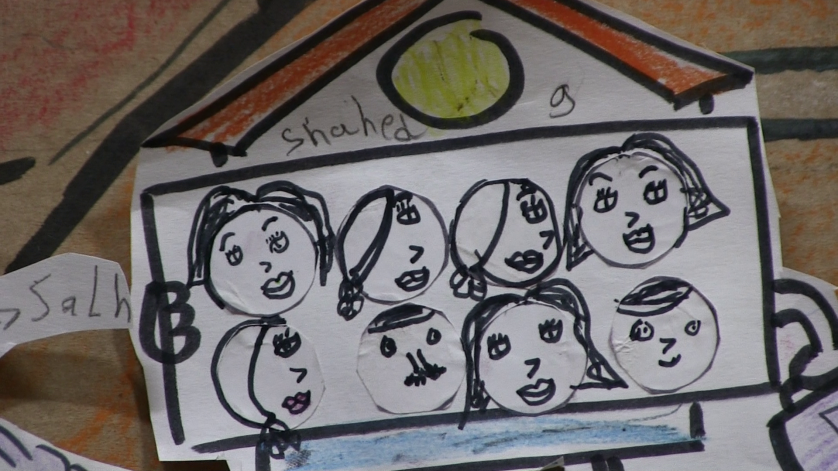 Family in a house – drawing by a refugee child 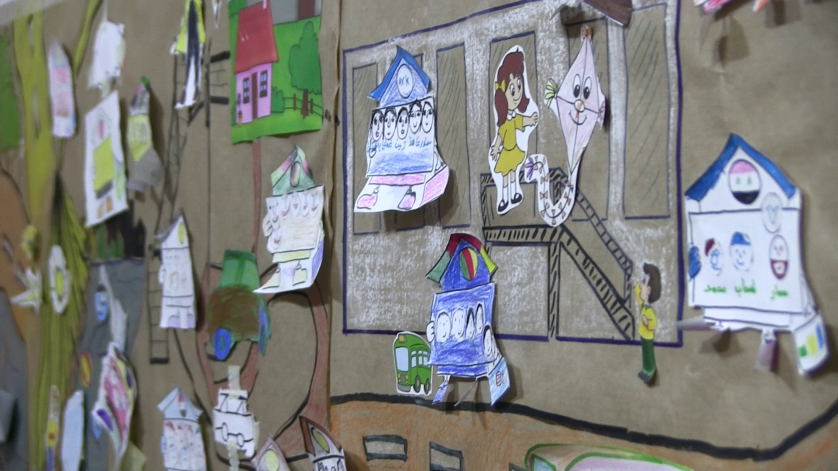 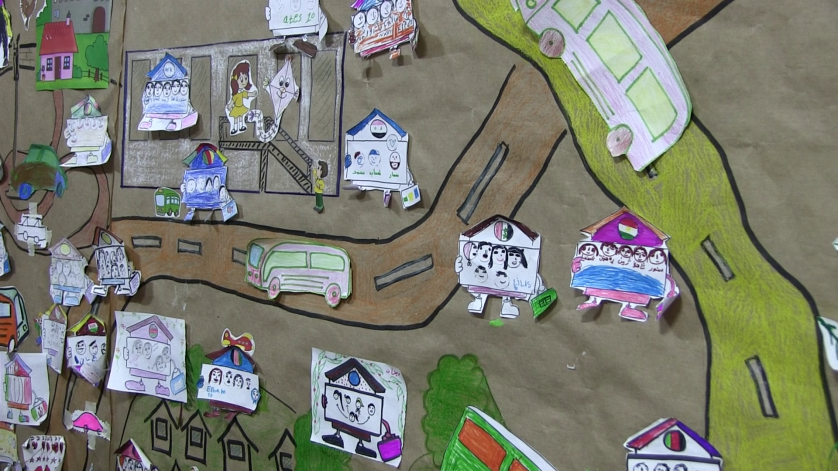 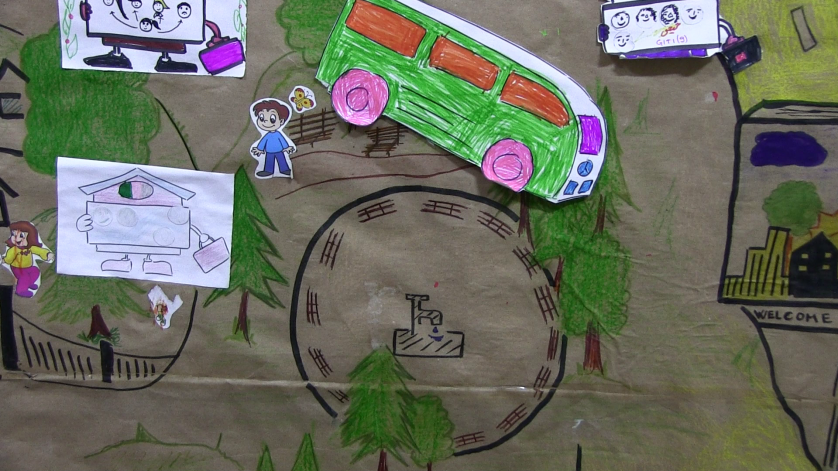 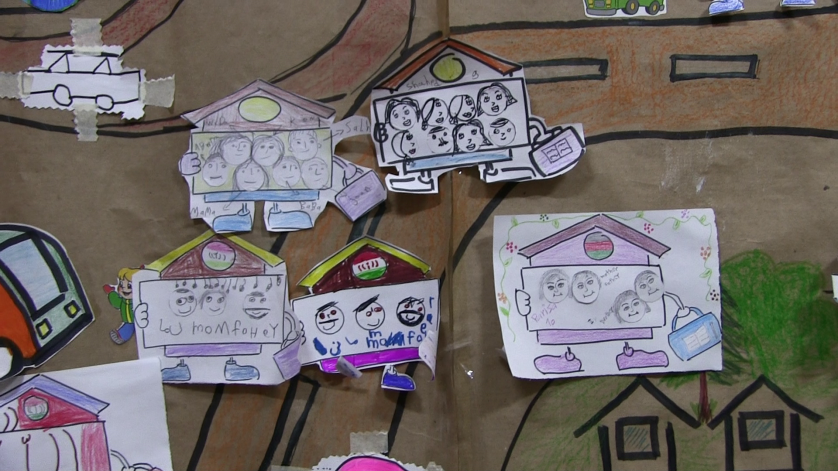 Children feel at home when they are on the road